Be sure to check out my Scripting4Crypto initiative. It’s a fun way to get into using cryptocurrencies all while getting your PowerShell needs met.

I want to share a function I created to quickly find a cmdlet(s) within the PWPS_DAB module.  I realize you can use the Get-Command cmdlet or the Commands window with PowerShell to do the same.  However, for me, I am constantly trying to remember the name of a cmdlet(s) and using one of the other tools just takes to long. ( Again, for me. )

The following is the function definition and the help information.

There are three parameters available, Name, Noun, and Verb. None of then are required and one or more can be included.

The following shows the meat of the function. I have included the BEGIN, PROCESS, and END code blocks even though not all are used. This is to maintain my own formatting. Obviously, you can exclude those if you like.

You can see that I am taking advantage of the Get-Command cmdlet, however, I am limiting the scope to the PWPS_DAB module. Also, all parameter values are being wildcarded by default to eliminate the need to enter the wildcards within the provided parameter values. Simplifies the process.

Now that you have the function, lets see what you can do with it.

To return all commands, you simply call the function without including any parameters.

The following shows a small portion of the results. Again, there are nearly 500 cmdlets, so listing them all would be foolish.

When using the Name parameter, all cmdlets containing the provided value will be returned. This is regardless of whether the value is in the verb or noun.  Also, this cmdlet is set to use the the positional value of zero.  So, if you don’t specify a parameter and you pass a value, it will be assumed to use Name.

The following shows a portion of the results.

Notice that the word set is included somewhere in all of the cmdlets. This includes both the verb and noun parts of the cmdlet names. 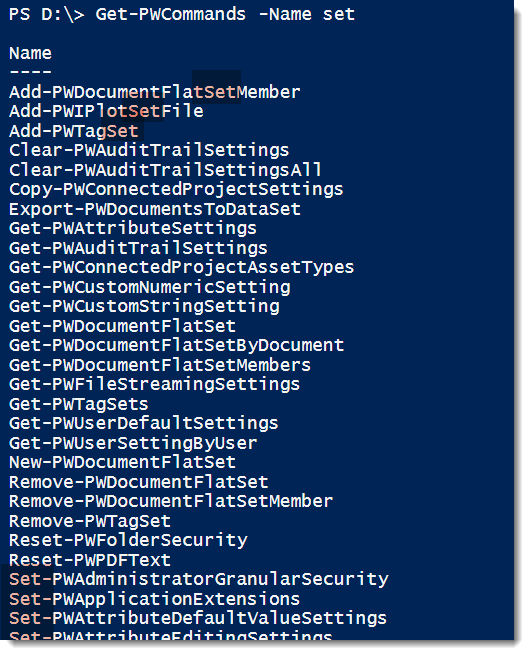 Get Cmdlets by Verb

Here we will get all cmdlets which use the verb ‘Update’.

The following shows the results. 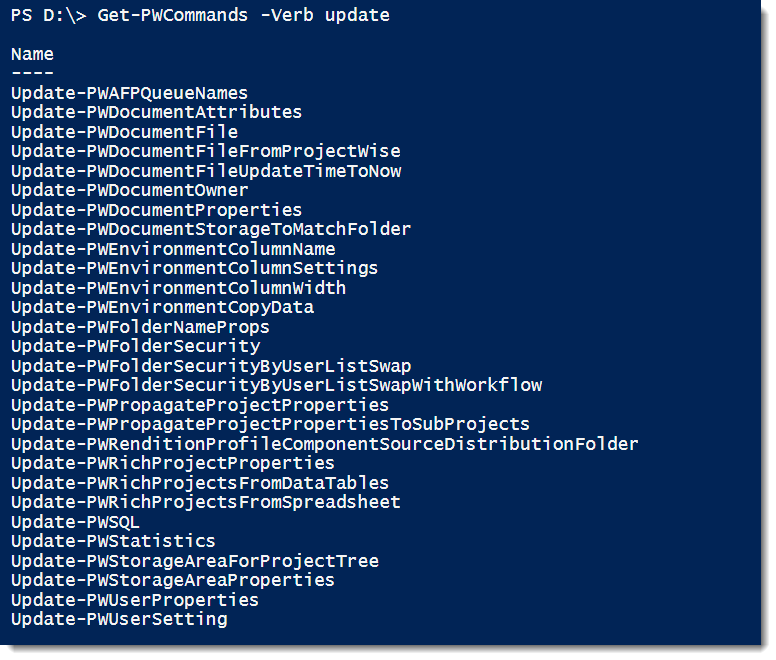 Get Cmdlets by Noun

Here we will get all cmdlets which use the noun environment.

The following shows the results.

Notice that there are different verbs being returned and all nouns contain the word environment. 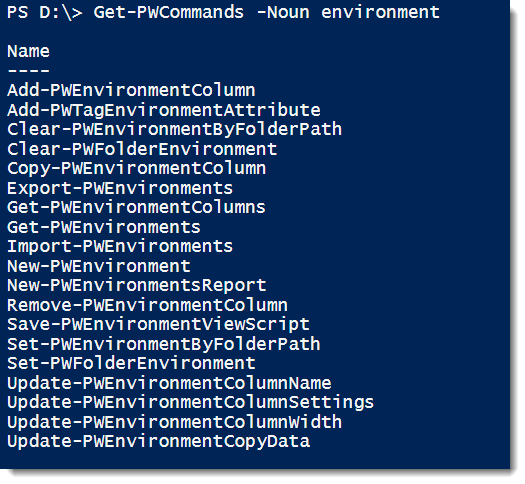 Get Cmdlets by Verb and Noun

Finally, we will provide a verb and a noun combination to filter the results a bit more.

The following shows all of the cmdlets containing the verb get and the noun document.

Notice, every cmdlet has the verb Get and every noun contains the word Document. 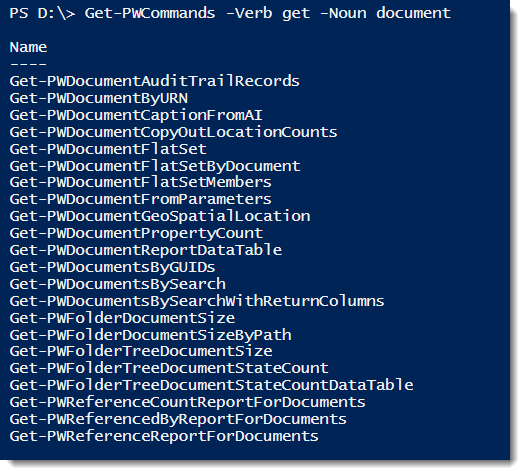 Again, the reason for this function is to expedite the process of getting cmdlet names available in the PWPS_DAB module. By providing one or more of the parameters, the returned list of cmdlet names will be filtered down. For me it is much quicker than using the Command window or the Get-Command cmdlet.

Experiment with it and have fun. And please, let me know if there is a topic you would like to see a post for. Or share a solution you have developed.

The following is a link to the complete psm1 file.

Hopefully, you find this useful. Please let me know if you have any questions or comments.  If you like this post, please click the Like button at the bottom of the page. And thank you for checking out my blog.

A staunch IT professional dedicated to making the ProjectWise experience better for administrators and users. I have been working with ProjectWise for 20+ years as a user, administrator, systems architect, developer, trainer and SME. I am a huge proponent of PowerShell and enjoy developing PowerShell solutions which aid administrators and users with their daily tasks. On a more personal note, my time away from work is spent reading, playing guitar, and relaxing on the beach. View all posts by Brian Flaherty

This site uses Akismet to reduce spam. Learn how your comment data is processed.